When exploring a dungeon, unless you have enough porter hirelings to carry them, you are assumed to put most of your most encumbering items (including Supply Bundles) into a pile while you explore carefully, returning to move them forward after scouting ahead. Encumbering items carried during exploration may reduce your movement rate and possibly impact your ability to react to surprises such as traps.

In combat, each encumbering item you carry (other than Armor, Shields, and a Weapon being used) imposes a cumulative -1 penalty to AC, and Attack and Damage rolls. You may use the first round that you are not Surprised to carefully drop all carried encumbering items, but may not move or attack while doing so.

For easy reference on your character sheet, mark items that you only carry during overland travel and leave outside of dungeons with a "T", items that you leave in the supply pile with a "P", and items you always have on you even during combat with a "C".

A Supply Bundle can contain 9 to 30 “faces” in any combination of Supply Usage Dice. Track the composition of your Supply Bundle with one of these cards. These bundles usually take the form of an over-shoulder sack or bag distinct from your Pack (which carries more specific items and is not encumbering unless "full"). Each bundle counts as an Encumbering Item. 8 or fewer total faces can simply fit into a Pack among other items. A D4 can fit on a belt in a pouch or small bundle.

Common supplies are tracked with Usage Dice. These are dice from D4 to D20 which correspond to the approximate amount of that supply you have. The Usage Die for a type of Supply is rolled when a normal amount of it is used. On a result of 1 or 2, the Usage Die steps down one size, or, when on a D4, you are out of that supply.

Fuel: Roll when any portable light source gutters out to replace it (approximately once an hour).

Rations: Roll before a long rest and/or after a phase of travel (~8 hours), and during short rests (only once for the whole party).
Ammunition: Roll after firing a missile weapon.
Medicants: Roll when First Aid or other medical treatment is performed.
Miscellany: Roll for materials for simple repairs, or other incidentals such as an iron spike, a short length of cord, a small pot of grease, or other items as the GM deems reasonable. If there is disagreement, perhaps allow an Intelligence or Wisdom check to have a specific item on hand.


Conceptual Status: Seems To Works In My Game

By default, most games assume all of the party's possessions are carried on their person at all times, with the occasional exception of pack animals during overland travel. For campaigns that emphasize resource management, separating the party from the bulk of their supplies adds a bit of verismilitude, and a gameplay dynamic I haven't really seen before in RPGs.

In addition to the advantages of Usage Dice (which I won't detail here since you're probably already familiar, but can be summed up as highlighting the tension of running out of materials earlier than expected while simultaneously reducing the tedious accounting required), I think tracking a pile of supplies separate from the party while exploring has these benefits & effects:

This house rule assumes an encumbrance system similar to Lamentations of the Flame Princess, where only "significant items" count towards encumbrance. I think the concept may still be suitable for a system which takes an even more "lightweight" approach to encumbrance, by making the supply bundles explicitly encumbering in a way that other items and containers are not. In fact this may be even more impactful than in an LotFP style encumbrance system...

In Tolmenwode Tales, my ongoing campaign of ~25 sessions so far, the first third of which were dungeon delving, there have been a few situations where the separation between the party and their supplies came into play. They usually involved tension around whether the party could retrieve their supplies if they needed to retreat from a charged situation. And there was at least one instance of a PC wanting to produce an item that would be in their Supplies during combat, which they could not access since it was in the pile a room back. We haven't done a huge amount of dungeon delving, but I look forward to more of these interesting situations in the future.

As GM, it was somewhat easy to forget this regime during play, but it wasn't that big a deal to suddenly remember it was a factor in the current situation; it's something the players should be accounting for anyhow. Describing returning to the pile to move it forward can be elided after the first few times. I think the dynamic it adds is worth the occasional hiccup.

Supply Bundles using Usage Dice pairs well with a Hazard Die type system, where every one or two Turns, it may indicate light sources gutter out, or the party needs to rest and consume a ration. I use a version of this in Tolmenwode Tales.

There are a bunch of recent posts and hacks for inventory management recently. Here's a partial compilation:

Usage Dice were popularized by their inclusion in The Black Hack. David Black also has some good reflections on what makes them good and when not to use them.

Brendan at Necropraxis covers some good inventory management/bookkeeping alternatives in his State of the Art post.

Anne Hunter at DIY & Dragons made a few great posts on resource management in her consistently great analytical style.

I encourage you to comment below, rather than elsewhere.

During character creation, only determine stats and gear. Then, if the character survives the session, they earn more detail. At the start of the following sessions, let everyone roll on one of a number of character aspect tables to flesh out their character, background, and relationships.

Conceptual Status: Seems To Works In My Game

I think this simple house rule can have these benefits/effects for old school style play:

Alignment as the effect of a spell

Cleric/Divine, Level 20
Duration: Permanent until overwritten by this spell or overridden by the target's volition (see below)
Range: Infinite within plane

Enchant an individual with an aura of, and variably strong inclinations to follow behaviors circumscribed by, an Alignment of Law, Chaos, or Neutrality, and (optionally) fluency in a language known only by others of the same Alignment.

The individual may at times act against those circumscriptions, but in extreme circumstances may be compelled after an introspective struggle (roll under WIS/CHA or save vs magic, etc).

After a series of such struggles, their Alignment may change toward that associated with the individual's actions.

Alignment is a perennially debated topic, but I was struck by the notion of looking at it from a different perspective. If magic exists, perhaps Alignment could be tied to the effect of a spell, like a cosmic-level "Charm Person". This explains both its ability to be "detected" and other mechanical interactions, while leaning into, instead of dodging the fact that it feels "artificial".

Just a quick note that the booklet version of Principia Apocrypha now has outlined fonts, which may fix issues with printing that some folks were experiencing.
on October 07, 2018 No comments:

Principia Apocrypha is a free Primer for Old School Style RPG Gaming in the form of a collection of Apocalypse World-style GM (and player) Principles.

along with some further reading and recommendations 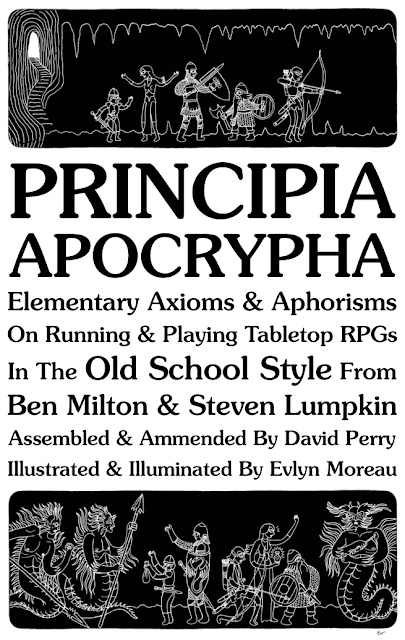 Right now it utterly baffles me how anyone ever feels like they can know they have actually finished making a thing they care about.

It has been more than a year that I started working on it (first private GDocs version says April 7 2017). Since then, I've gone through many sinusoidal phases of in/active development of seemingly endless iterations, and actually ran some damn games (still only about 25 sessions but at least I feel like I can walk most of the talk). I commissioned art from Evlyn Moreau, and a few weeks ago started learning layout in Scribus (I actually thoroughly enjoyed making GDocs jump through hoops to make things look good-enough, which I might make some posts on... Scribus less so. Thankfully we now have Affinity Publisher).

And I started this blog, partly just to have a place to put PA. I'm still anxious, but I'm forcing myself to put my finger over the big red button. The next step may be to get this up on DTRPG (for free)... I'd love to hear opinions on whether it would be worth the hassle. And, you know, any other opinions.

On his blog Anxiety Wizard, David Wilkie wrote this post about treasure-detecting dream-shrooms. After reading it, I immediately had the opinion that it's a "nigh-perfect OSR content post". By that, I mean it's a great example for what OSR (and DIY RPG) bloggers and creators should strive for in presenting gameable content in a blog post or similar format.


A quick aside: A while back I decided to try my voice at reading for Blogs On Tape, and this post was an obvious choice. I was a bit stuffy at the time so my voice is a bit more nasal than usual, but it turned out alright and went up a month ago. Anyhow, the rest of this may benefit from reading or listening to the post first.


Undoubtedly, it isn't a universal skeleton for all good content posts. But whether David was aiming for it or not, I think it epitomizes a lot of what makes content "gameable", and other desirable qualities that seem to increasingly define good OSR/DIY D&D content. Here's what I think is great about it:

I haven't posted much original content in the wild, so I don't want to presume to define an ideal rubric here - I think some more analysis and distillation can be done to work toward that (not to mention I'm sure something like it probably already exists in the bottomless well), and I'd love for others to add to this list or create their own. But in any case, I hope to live up to this post with my own work.
on September 07, 2018 No comments:
Labels: OSR Bloggers, Speculative Theorizing

Why can't I hold all these wizard towers

A wizard tower that has been placed under the “Bind Wizard Tower To Summoning” enchantment (which one exactly depending on the vagaries of cosmological fate) erupts from the ground 500’ away from the caster. At the next dawn, sunlight causes the tower and anything summoned with it to dissolve, returning whence it came. If someone who enters the tower writes up a session report describing their explorations, tribulations, and likely death and shares it with the OSR community and/or creator of the tower, they receive XP equal to 500 multiplied by the (lowest) character level intended for the tower.

Some pre-bound Wizard Towers ripe for the Summoning:

Watching a stream of Caves of Qud, an engraved item was looted that featured a "carnivorous geode", which is an amazing concept, and thus I googled the term. I did not find any relevant results, but the one result that did appear is far better. It is a spam site for a generic drug, containing some of the most beautiful machine-generated language I've read. It is reproduced here to save the innocent from malware, and scrubbed of the embedded mentions of the drug.

Best read aloud. Mine it for inspiration or simply bask in its glory. Then, please return to the Library of Babel.