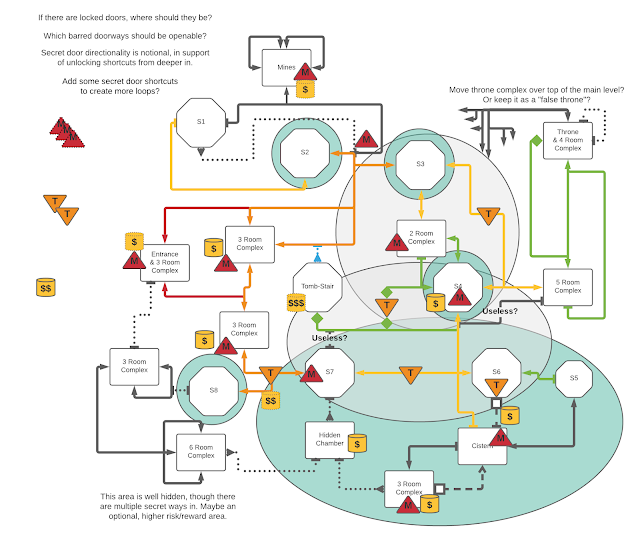 Welp, picking up where I left off (before a rapid fire mix of obsessions with multiple other projects, creative energy dips, all the while not really keeping up with RPG news or social sphere because it's increasingly all just a bit much, but that's how I roll these days) like nothing happened, because there's no reason not to. Though, my description of my process will be even more fabricated due to fuzzy memory of stuff I've already done, and my tone has completely changed, but I am a mercurial entity.

Step the Fifth: Refine the map with the Themes in mind

I next started to add detail to the map in a number of ways that just felt right, partly guided by the Themes, and partly just playing around with the tools Mipui has to create some more interesting layout. As mentioned in my last post, I identified the 8 "memorial statue chambers", as well as the central locked stairway to whatever lies below, and cut the existing downward stairway.

This also included removing some bits, fusing some rooms, together and tweaking the sizes of some rooms; I tended to standardize on 3x3 and 3x5, as well as the octagon-ish statue chambers, seeing this as a sort of Dwarven architectural grammar. It'll also help describing the spaces while running the game, as well as emphasizing the rooms that break this standard.

I also placed icons for where treasures might be placed, both minor and major, just as a rough draft for thinking about how the map flow might work; how a party might progress through this space. I also played around with three thematic areas -  a throne room, mines, and a cistern, which I turned into a little maze of barred passages.

I can't remember if this was true of the Donjon output or if they were lost in the import to Mipui, but the map didn't have any secret doors, so I also started adding these in where they felt might be interesting, to make connections for loops, or to break up areas where the flow felt too open.

At a later point, but it bears mentioning here, while thinking about what types of rooms might exist in this dungeon, Industriousness was an obvious Dwarfy trope to lean into, so I imagined that each of the Siblings was associated with a type of Craft, and hence needed a Workshop. So that's 8 more rooms identified. You'll see them noted on later maps.

Step the Sixth: Invoke the Saints Jaquays and Melan

I had the thought to visually block out areas of the dungeon in terms of accessibility to identify both chokepoints and the regions they separate. 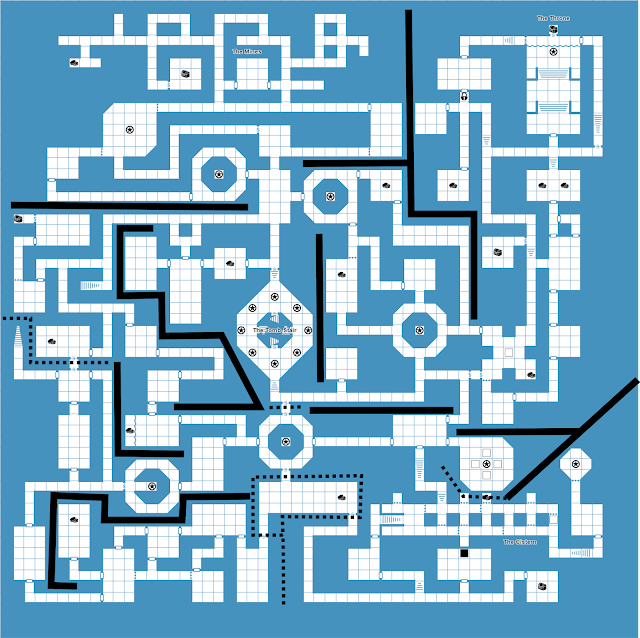 Dotted lines represent areas that were only accessible by secret doors. This started to show some basic areas and got me thinking about the Zones in the dungeon - more on that in the next post.

But I realized if I really wanted to analyze the flow of the map, I may as well make a literal flowchart, so I fired up Lucidchart (well, my work account for it - don't tell anyone). I simplified "room complexes" which were groups of closely associated rooms which acted like one space, in terms of flow, relative to other complexes.

This helped me visualize the dungeon in a similar way to a "Melan diagram", and see how Jaquayed it was, at least in terms of branching and looping. I think I made a few minor tweaks to the map as a result of this, but nothing extensive; my prior tweaking (and Donjon) did a pretty good job in this respect.

Below, I color-coded distance from the entrance (factoring in secret doors, especially those that only open from one side), to begin thinking about the high-level pacing of exploration; I could see how a party might progress through the dungeon over multiple sessions and/or expeditions. This can help in placement of monsters and traps, increasing the challenge as they explore deeper into the dungeon, to the extent that I wish; we still want a fairly flat (or spiky) difficulty curve in a good old school style dungeon. 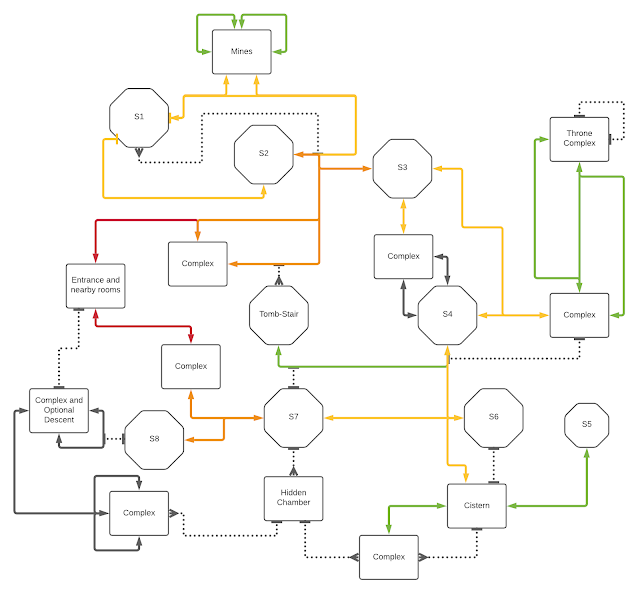 At this point I felt pretty good about the general map flow, so I moved on to...

For the purposes of this exercise, I wanted to put my trust in the BX stocking procedure. However, instead of using the process verbatim, I used a simplified procedure described in this B/X Blackrazor post which seems like a classic.

Here's a peak at my notes from this process (in Workflowy, which is completely indispensable online notetaking tool. All of my thoughts from the last decade that haven't turned into Google Docs yet live in there.) 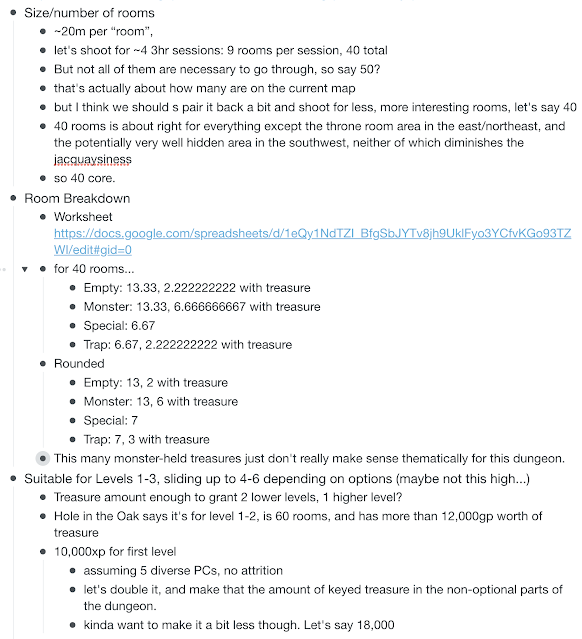 I used Gavin Norman's Hole in the Oak as a touchstone, since I had it in hand and knew it was both faithful to BX and just darn well made.

I made a spreadsheet to easily break out the number of rooms of each type, as well as grouping treasure values: 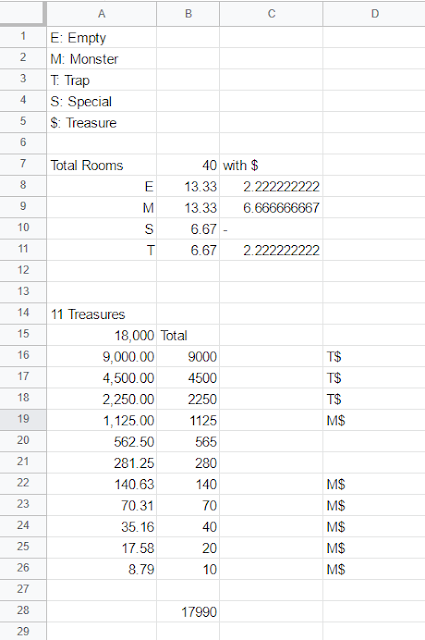 I expect I'll be adding to this treasure total, however. I have some (optional) puzzley ideas I want to use that would feel bad for not rewarding the players, and there really isn't enough in this budget to cover them.

There's also the question of supporting a scaling reward for the scaling difficulty feature of the dungeon, but there's an easy answer to that - the invading factions will bring valuable treasure with them; in most cases, literally carrying them. They might even start hoarding the dungeon's treasures the party hasn't found yet.

I manually assigned the treasure values to certain room types in a way that felt right - since I wanted some interesting traps, I put the highest value treasures behind them.

Next I started to look at placing the room types on the map by using tokens for Monsters, Traps, and Treasures on the flowchart, so I could easily move around and combine them. 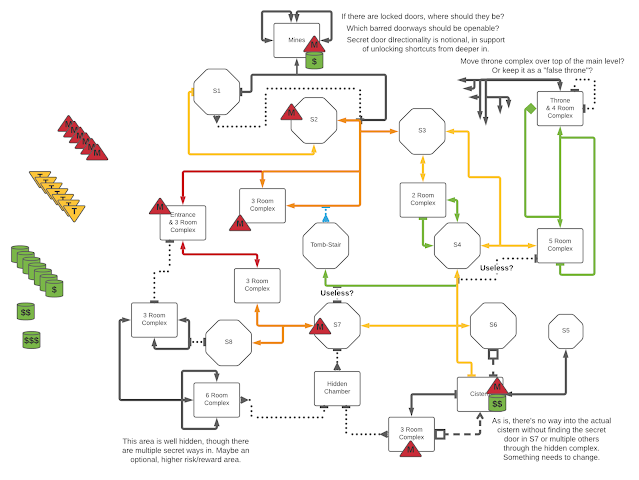 Since the map needed to be pared down to hit 40 rooms, I'm not working on the sections at the bottom left and top right; I'll either come back to develop them as optional sections, or cut them entirely.

I started noticing where the traditional BX room types overlapped in definition and intention, and were fighting some of my existing ideas for certain rooms. Are the Memorial Statue rooms "Special" rooms? Are they Trapped Treasures? There's 7 of them, and that doesn't leave any room for other rooms of that type.

This sent me on a design philosophy tangent to identify a room typology that aligned more closely to how types of rooms are used in practice, but eventually realized it was silly to hold a practical procedure up to the epistemic standards I had in my head unless I devoted more energy to it.

I do remember gaining some clarity on the real intent behind the traditional room types from the preface to Hack & Slash's Tricks, Empty Rooms, and Basic Trap Design; though re-reading it now, doesn't really conjure the exact insight I seem to remember. It's still a great resource.

So I might return to this idea in the future, but for this project - whatever, I'll not hold myself too closely to the procedure, and it'll all come out in the wash.

Anyhow, physical pain from the posture I've put myself into while polishing this post is signaling that I'm putting more energy into it than I have in the actual dungeon over the past few months, so it's time to move on!

I encourage you to comment below, rather than elsewhere, and hold tight to what little warmth of human contact you can grasp.

Long live the Shards Of The Shattered Blogosphere Spinning Silently Yet Sparkling In The Exponentially Expanding Void!

Be kind, approach disagreements with curiosity, enrich the conversation!